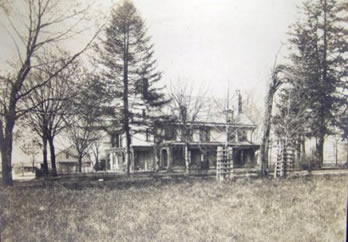 Riverview Farms Home owned by Thomas Garrett Sr, and his wife Sarah Price. This is the home where Thomas Garrett Jr. was born. Thomas Garrett Jr. would live at Riverview Farms before moving to Wilmington, Delaware in 1822. In 1813 Thomas Garrett Jr. had a vision from God to put an end to slavery. In 1818 Thomas Garrett Jr. became a PAS member.
The property at Riverview, a farm of about 284 acres owned by Thomas Garrett, Sr. in Upper Darby, Pennsylvania, was one of the properties of the ardently anti-slavery Garrett Family, was connected with Underground Railroad operatives, and was the site of a formative event in the life of young Thomas Garrett, Jr. which he recounted as point in time where he determined to dedicate his life to assisting “God’s poor.” Of Quaker faith, Thomas Garrett, Jr. was arguably the most effective and well-documented “stationmaster” in the Underground Railroad network connecting Delaware to points north, as attested by his assistance of 2700 individuals on their way to freedom, his prosecution and fine in 1848 under the Fugitive Slave Act of 1793, and his familial and religious ties to the Philadelphia, Chester and Delaware County region. Already recognized through site designations on the Network to Freedom are his house site on Shipley Street in Wilmington and his grave site at the Wilmington Friend’s Meeting House, the property at Riverview Farm adds an important and necessary component to recognizing the life of this important activist. Riverview Farm, where he was born in Upper Darby, Pennsylvania, was also the site of a formative experience in the life of the committed abolitionist, his first personal encounter with the injustice and fear African Americans, both free and enslaved faced while the institution of slavery was permitted to flourish in this country. The event was recounted by William Still in his book The Underground Railroad.

Cornerstone from Riverview Home in Upper Darby, Pa
The TS & G stands for Thomas and Sarah Price Garrett when they added the addition to Riverview home in 1790. When the Riverview home was torn down in 1969 the stone was saved by family.